Researchers say the pumpkin habanero was an accidental discovery. They didn’t set out to develop a pumpkin-shaped pepper, but were trying to breed a variety that would be disease resistant, have a unique taste and appearance with high nutritional content. The pumpkin habanero is high in antioxidants, calcium, magnesium and beta-carotene. It was developed through traditional breeding methods by crossing varieties of Mexican and African habaneros over a six year period, Ayeni said.

“The market for locally grown ethnic foods continues to expand,” Ayeni said. “We want to encourage growers to consider ethnic specialty crops so they may target production to meet the rapidly growing demand in the United States. These crops lend themselves to year-round production for sale, including at farmers markets.

“In general, immigrants from all over the world cherish the plant varieties that are prevalent in the food systems of their home countries. I would be delighted to see Rutgers University lead the way in promoting local production to make these crops available as fresh as possible to a growing consumer population.” 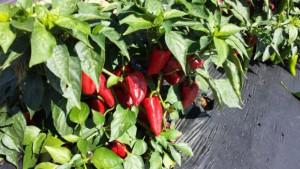