The oyster breeding program is at the forefront of genetic research to develop a superior oyster for aquaculture. This includes the production of oysters that grow faster, are resistant to disease, have better meat quality, and are better for the environment. Dr. Ximing Guo, oyster breeder, is concerned by challenges facing the world, such as pollution, over-fishing, climate change, and new diseases. These challenges are causing oyster populations to decline, so Dr. Guo is doing research to 1. help oyster fisheries, 2. sustain the oyster industry, and 3. support aquaculture development worldwide. Rutgers shellfish research mainly takes place in centers within the Haskin Shellfish Research Laboratory, a station of the New Jersey Agricultural Experiment Station and an institute of the School of Environmental and Biological Sciences.

Julius Nelson founds Rutgers’ Oyster Investigation Laboratory, forerunner of today’s Haskin Shellfish Research Laboratory—the most productive and prolific oyster research center in the nation—and together Julius and his son, Thurlow Nelson (RC1913) would pioneer oyster cultivation. “The earliest ecological studies of bivalve larvae in the western hemisphere were conducted by Julius Nelson, biologist at the [Rutgers] New Jersey Experiment Station, and his son, Thurlow Nelson, in estuaries on the east coast of New Jersey.” —Journal of Shellfish Research, June 1988.

In an effort to save the oyster industry, when Multinucleate Sphere X disease decimates the oyster population in New Jersey, Harold Haskin (RC’36), director of the Oyster Laboratory 1950-1984, develops a breeding program that “produces disease-resistant oysters and helps stop the massive deaths of the shellfish in and around the Delaware Bay,” according to Haskin’s 2002 Philadelphia Inquirer obituary.

The Oyster Laboratory is renamed the Haskin Shellfish Research Laboratory, the first building at Rutgers named to honor a living person.

The eastern oyster, Crassostrea virginica, provides important ecological and economical services, making it the target of restoration projects and supporting a significant fishery aquaculture industry with landings valued at more than $100 million in 2012 in the United States of America. Due to the impact of infectious diseases on wild, restored, and cultured populations, the eastern oyster has been the focus of studies on host–pathogen interactions and immunity, as well as the target of selective breeding efforts for disease resistant oyster lines.

Despite these efforts, relatively little is known about the genetic basis of resistance to diseases or environmental stress, not only in eastern oyster, but also in other molluscan species of commercial interest worldwide. In order to develop tools and resources to assist in the elucidation of the genomic basis of traits of commercial, biological, and ecological interest in oysters, a team of genome and bioinformatics experts, in collaboration with the oyster research community, is sequencing, assembling, and annotating the first reference genome for the eastern oyster and producing an exhaustive transcriptome from a variety of oyster developmental stages and tissues in response to a diverse set of environmentally-relevant stimuli.

These transcriptomes and reference genome for the eastern oyster, added to the already available genome and transcriptomes for the Pacific oyster (Crassostrea gigas) and other bivalve species, will be an essential resource for the discovery of candidate genes and markers associated with traits of commercial, biological, and ecologic importance in bivalve molluscs, including those related to host–pathogen interactions and immunity.

Please contact your local oyster purveyor to inquire about where they source their oyster varieties. Many oysters labeled disease resistant or ‘triploid’ are from the Rutgers NJAES oyster breeding program. 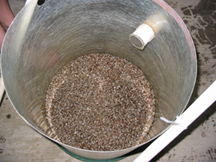 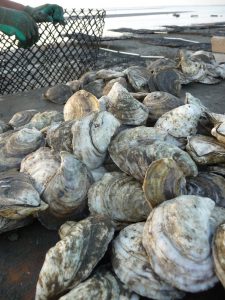